If you've made it this far (LHR) it means you have SOME money, right? Well, for us it feels like we had saved just enough to get our butts over to England and little else. 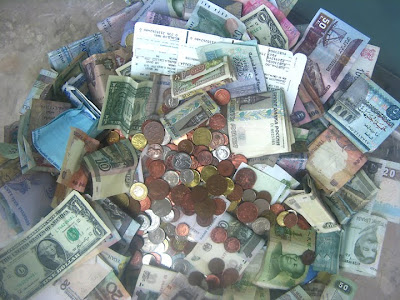 Peering into a big donation jar at Baggage Claim, a giant financial melting pot of sorts, I thought about England being an international financial hub. If you've been to London, you know that finance types in suits and on cellphones outnumber regular civilians 2 to 1. And I thought about how Tai and I are entering this new world, not as international jet-setters of independent means, but as poor students, essentially. Both he and I are known far and wide for our thrifty ways, so it'll be interesting how we'll manage in a country known for being too expensive. So I threw in my dollar.

One thing we did have a lot of is dollar bills. Between the $1500 we made from our gigantic yard sale and my hoarded gelato tip money, we had enough to recreate the scene from Indecent Proposal. We were planning on doing just that while staying with Tai's brother Mark in London, but had discovered that the house cat named Felix refused to leave our bed. So instead, here he is playing the role of Demi Moore. 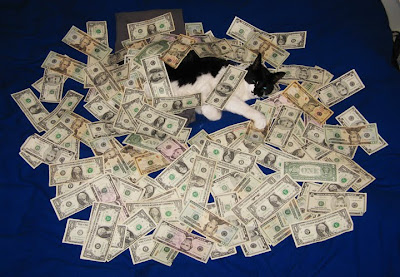 On another note (pun!), it's nice that the Fed has decided to make our money more festive-looking over the years. See all those subtle hints of color? But the US is still so far behind the rest of the world in terms of pretty currency, isn't it. I quite like how pounds look, even. But you know what I like the most about English currency? The £10 note. Instead of being asked to put my financial trust in some mysterious godly entity that sits inside an eye atop a pyramid, I can now gaze at Mr. Charles Darwin contently, and remember that, despite all the hassles of life that money causes, in the end we're just animals seeking out food, shelter and companionship. With that in mind, how can we not succeed? 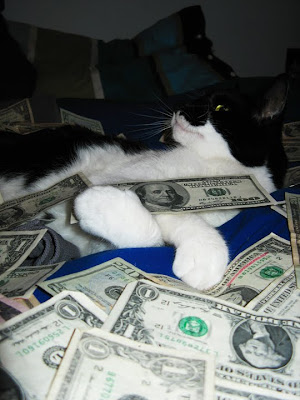 And here we are!

After many years of threatening to leave Los Angeles, we have finally done it! Tai and Vera are now calling a little town called Brighton, on a little island called called Great Britain, home. Tai is attending University of Brighton studying Sustainable Product Design, and Vera is getting enmeshed in the local green/sustainable/community scene. 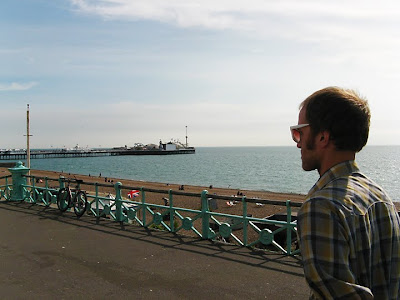 Like many American expats before us, we are thoroughly bewildered by all the tiny differences that make England a whole 'nother planet compared to the States. Not the least of which is the whole "opposite side of the road" confusion. Every day is an adventure, sometimes a misadventure, so we thought it would be appropriate to document what happens to us, and what we learn from it. Every entry is a post-card of sorts that we send to our friends and family, and to any strangers that may stumble upon this little page. Also, we hope that, with this blog, any other Yankees making the cross-Atlantic migration may learn about how things work here, and perhaps they won't make the same mistakes we did!

PS - If the blog name sounds familiar, it's because the name is inspired by a book by Bill Bryson - Notes From a Small Island. An American living in England, he traveled all over Great Britain and chronicled all the things that make the English so lovable and bewildering at the same time. We highly, highly recommend reading him!
Posted by Vera & Tai at 11:24 No comments: